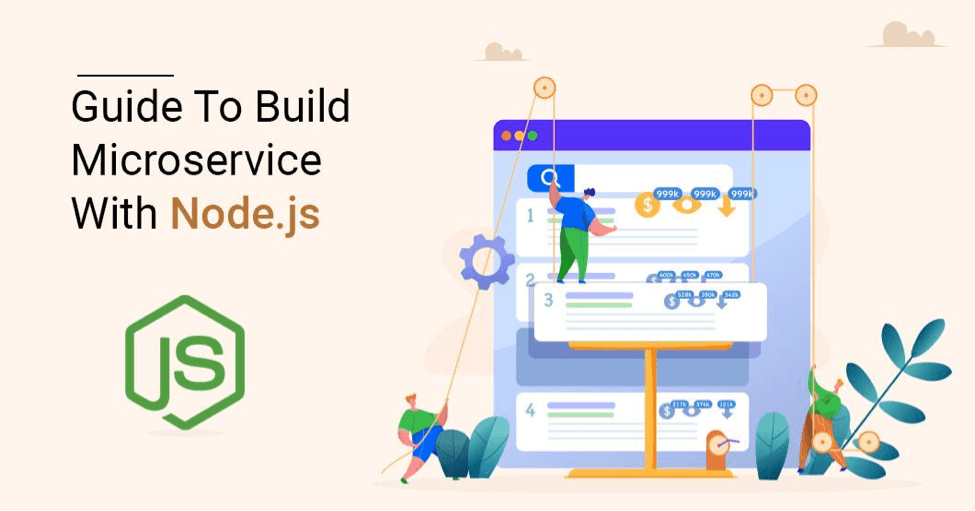 You need dynamic programming when you are looking to build a real-world application and that too in JavaScript.

With the surging size of the JavaScript application, the number of challenges that you have to face also increases simultaneously. So, to solve this issue, microservices architecture is introduced.

As you go reading this article, you will move a step further toward building real-world microservice architecture. But before that, let us first make you understand what microservices and Node.js are.

What Do You Mean by Microservices?

Microservices are a form of service-oriented Node.js architecture in the field of software application development.

They are a group of small services interconnected to build a single application with lightweight protocols. Due to the integration of smaller services, the modularity of the single monolithic app improves.

Today, the use of microservices has increased due to the numerous benefits delivered by them.

You can concentrate more on the development of monofunctional modules by using microservices to create JavaScript applications.

The process of application development will turn more agile by the use of microservices. Also, you will not have to deal with the problem of continuous testing.

Developing monolithic applications require the deployment of the entire application, along with each update. Similar is not the case with microservices as they are not reliant on the type of framework.

Microservices are also not conditional on the technique or programming language used for developing them.

With the developers’ perspective, they mostly prefer Node.js to develop JavaScript microservices. Node.js, written in JavaScript, is termed as an open-source, cross-platform, runtime environment.

You can leverage it to develop server-side and networking applications. Node.js has the capability of running on several platforms, such as OS X, Linux, and Microsoft Windows in the Node.js runtime.

As we told you that a majority of developers prefer using Node.js for building microservices. Let’s see why:

Owing to the several benefits of Node.js, many famous brands, including yammer, Uber, Microsoft, etc., use it for their application development.

Here we will exemplify a business, which needs to identify two ZIP codes and calculate & provide distance between both the ZIP codes in miles.

We will make use of validation techniques for calculating the distance and identifying the ZIP code. The necessity is to configure external API calls and quick duplication of calls.

We need to build a cost-effective process and can put internal cache into practice.

To start, install Node.js on your workstation. We are here using version 8.11. You can get the latest version of Node.js from Nodejs.org for your operating system.

We will use the package manager, NPM, to install dependencies, bootstrap the project, and run the service.

Initialize the project with npm init and execute this command in the root folder. This command will guide you through package.json file creation and establish the foundation of our project and accept the default.

If you want, you can later update this. Execute the following command.

The two primary packages on which the microservices will take its basis are Request and Express. The Request package helps in establishing a connection with web-based APIs.

The Express package is an arrangement for Node applications. It is used as a pillar to support Node.js foundation of microservices.

We will use the following command for adding these packages and run the command.

Two files and one folder will be created by the command npm init. The original file is server.js in our project, and API support files saved in the API folder.

The folder created includes package-lock.json, package.json, and node_modules. The dependencies of Request and Express packages saved in node_modules.

Let us first start with our original file server.js. Then in the next steps, we will identify routes, insert controllers, and establish the connection with an external service.

For creating server.js file, use the following code.

Now, let’s identify the routes to transmit a response. The earlier built servers allocate routes to process all the requests.

In this step, we will identify routes for the server and allocate every route to a target in the controller object, which we will create in the next step.

The routes will be defined by two endpoints to receive and send off requests. For this project, we will use the ZIP codes as the two parameters to mark paths for distance endpoints.

The latest versions of JavaScript put the ‘use strict’ directive in use. This directive is for implementing secure coding practices. Module.exports is for affirming functions inside a module.

You can use the defined functions as they are accessible in another file with routes module. The routes module can be imported from server.js and used to state the routes for the Express package.

Now, two routes included in the app at this point in the process. The first route transmits the GET requests on /about the endpoint. These requests are managed by the about function in the controller.

The second route added to the app transmits GET requests on the /distance endpoint. These requests are managed by get_distance function in the controller.

The two parameters defined in this stage labeled as zipcode1 and zipcode2 in that order.

The controller logic added to the microservices for inducing a few new functions in it. A controller object built on understanding user actions & intentions and establishing communication with the new or modified data for processing objects.

For our project, we are developing a controller object with two properties. These two properties are functions to manage the requests transmitted by the routes module.

We build properties controller objects using the code above. It references the file package.json to allow process objects to import and leverage the informational content of the file.

The following functionality, get-distance, is built to maintain coordination between the distance module and find function. It accepts error & distance objects and returns the response object if an error is received.

After creating controller logics, our next job is to build an external API call to deal with the calls to a third-party API.

The distance API that we are going to use is available at ZipCodeAPI.com for free.

We are setting an expired test key as a default key in our project for making external calls. See the code below:

The above code will run the Request package for the external HTTP request. This code gives request, response, and next objects to find function as parameters.

Among these three, the request object accepts the URL of the service. Then the response is handled by the callback function.

In case there are errors, the response’s status will be HTTP Status code 200. Then, the response’s body resolves into elements and returns, which increases the efficiency of response handling.

Finally, your application is ready to run, provided there are no typos. There is an export of distant objects. As per the requirement, the controller can represent functions and concrete instances of the external API calls.

To sum up, coding is a complicated job, and even with small syntax, punctuation, or other problems can result in errors.

While running this code, if you find any error and are not sure about the resolution, you can refer to the internet.

You will find several resolutions and ways to create microservices with Node.js. So start code, and execute the development of enterprise-level microservices. Best of luck, coders!

What Do You Mean by Microservices?

Microservices are a form of service-oriented Node.js architecture in the field of software application development.

What are the benefits of micro services?

What are the benefits of using NodeJS?