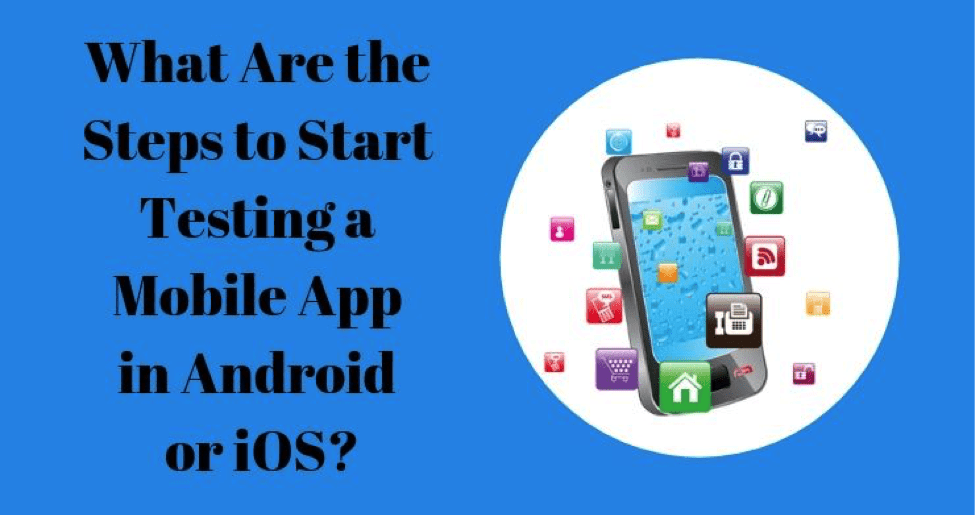 The devices comprise internal processors, hardware, screen size, space, camera, and much more. Testing on these is termed as hardware testing.

The apps which function on mobile appliances and their properties are being tested. This is termed as Mobile application testing.

Steps to initiate testing a mobile application in Android as well as iOS platforms:

It is a compulsory specification which the app has to function on all Android and iOS platforms as the clients can operate on different platforms. To make sure that the application functions in all kinds of platforms, experts have compiled manual testing, automation testing, and testing in a cloud simulator.

Things to consider for web and mobile app testing

What should beginner programmers know about software testing?

The development procedure, along with the projects was SCRUM, and every sprint takes about 15 days. After every 2-week development squad provided a logically finished product to the quality assurance team, which would perform their test cases on it. Lapse proves to be struggling as in every product quality assurance team has to make sure that the products working priory are still in working conditions. To succeed in this, the quality assurance team had automated mobile testing basics set of functions and executed the automation script in every product which consumed less time. JIRA can be effectively used to register and trial bugs.

This will be acquired by seeking the beta users, who are a group of hundreds of students of university-level to surf every individual page which exists within the mobile application. This assured that every error which exits were corrected before the app was launched. And that the application comprises all the essential properties and functions.

The performance of the functions such as balance, utilizing resources, responsiveness, balance parameters according to the standards and user interface (UI) for the delivered product is precisely checked and examined.

The application was examined through various operating systems (OS) editions or devices with the help of Device Anywhere Simulation tool, along with it, it is also physically tested through dedicated mobile website testing and app testing laboratories.

Along with the entire procedure, the quality assurance squad maintains the test case sheet, which comprises all kinds of functionality executed; at last, the app is permitted to be launched. The whole end to end mobile app testing procedure comprises combined attempts of on-site as well as off-site squad members.

Lastly, quality assurance managers produce the test summary declaration. This is a kind of management report that delivers information of every important detail unveiled by the tests executed, that comprises of examination of the quality of testing attempts, the quality of software mechanism under test and figures extracted from the reports.

The reports incorporate various kinds of testing executed and the time duration consumed in the testing procedure. This supports in enhancing any future test strategies.

The concluding file displayed whether the software mechanism which underwent test can be used and has catered to the acceptance standards laid down by the assignment stakeholder.

Along with the ever-growing trends and increasing demand for mobile applications, all the chief establishments are vouching for bringing their business to the mobile app.

Most of the manual mobile testing tools such as Appium, due to its primitiveness and easy to use characteristics are becoming successful and most extensively utilized tools across the world for executing automation testing of mobile applications for iOS as well as Android platforms.

Manan Ghadawala is the founder of 21Twelve Interactive which is one of the best mobile app development companies in India and the USA. He is an idealistic leader with a lively management style and thrives raising the company’s growth with his talents. He is an astounding business professional with astonishing knowledge and applies artful tactics to reach those imaginary skies for his clients. His company is also recognized by the Top Mobile App Development Companies.

What is Ascertain specification?

This is a must have specification for any app. It means that your device should not be restricted to a specific operating system. Apps should work on all operating systems such as android and IOS as clients will check it on all kinds of devices.

What is a Test Case sheet?

This is a document which contains complete details of all the functions which were executed on the app while testing. It is gathered before the final launch of the app. It has all the details from on-site and off-site team members and their tasks done to test the app.

What comes under Performance testing?

Manan Ghadawala is the founder of 21Twelve Interactive which is one of the best mobile app development company in India and the USA. He is an idealistic leader with a lively management style and thrives raising the company’s growth with his talents. He is an astounding business professional with astonishing knowledge and applies artful tactics to reach those imaginary skies for his clients. His company is also recognized by the Top Mobile App Development Companies.